As part of my work, I’m required to make regular visits to Llandudno and so, I usually take the opportunity to activate GW/NW-070 Great Orme. On Thursday, I had a meeting arranged for 1000 local time and so I set the alarm clock for 0400 local time, to see if I could work some DX.

When I arrived at the car park, I was greeted with a very strong wind, nevertheless, I made my way up to the fence and as per usual, bungeed the Antron-99 to a post. I was unable to get the antenna on more than two poles, the wind would not allow it. So I was stuck with a short antenna. A self spot was sent and my first contact followed within seconds.

There was no sign of any VK/ZL action, however, I was still a little early. A few more EU contacts were made and then I recived a call from Rig HI8RD in the Dominican Republic at 0620z.

At 0653z Lewi LA4CIA called in with a very rare Aeronautical Mobile call for a SOTA activation. Lewi was flying his Boeing over Germany and was a great signal.

I carried on with the EU calls, before having to go QRT at 0830 local time, in order to make my appointment. Big thanks to Ernie VK3DET for trying so hard to make the trip. Sadly, it wasn’t to be, with nothing heard from VK/ZL. 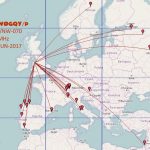 With my appointment dealt with, I made a return to The Great Orme, in order to meet up with Mike GW0DSP and Mario DL4MFM or MW0GQY who was visiting from Germany. While Mario his wife went for a coffee, I set the station up and when Mario returned, he rattled off plenty of contacts on 10m ssb/cw.

Mario had to return to his hotel and so I decided to carry on where I left off on the 20m band. There were plenty of takers, however, DX was very thin on the ground, with just one Canadian station making the trip. By now the wind was really howling and it was getting late, so I decided it was QRT time.

The 20m band was playing funny games, with some interesting short skip into GM as well as the Island of Lewis and Cornwall. Plenty of French stations logged too.

In terms of radio, Great Orme is probably one of the best summits in the UK. The take-off is superb.

Thanks to all the callers.